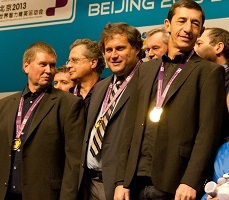 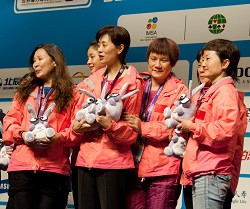 It was appropriate that each of the winning teams contained the Bridge Ambassadors here in Beijing, Fulvio Fantoni & Wang Wenfei.

Four Open and Four Women’s Teams represented Bridge, which comprises Teams, followed by a Pairs and then an Individual Tournament. The event also showcases four other Mind Sports – Chess, Draughts, Go and Xiangqi.

Established in 2011 as an annual event, these Games are organized by SportAccord and comprise elite competitions in Bridge, Chess, Draughts, Go and Xiang Qi (Chinese Chess). 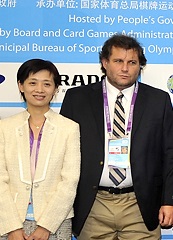 The WBF is very proud to announce that Fulvio Fantoni and Wang Wenfei (pictured left) have been appointed as Ambassadors for Bridge by SportAccord. Read more about it

In Bridge, top men and women players are invited to complete in teams, pairs and individual for attractive prize money.

Links on your left take you to the various pages for this year’s event, and you can find additional information about this and the other featured disciplines on the MindSports Website

An online competition was run giving players a chance to win a trip to the Games.Leo LaSota won the open and Liang Fan is the winner of the junior prize. More information about these players

The SportAccord World Mind Games are organized very much in the ceremonial style of the Olympic Games, with emphasis on publicity and communication.