The World Bridge Federation was formed on 18th August 1958 in Oslo, Norway, by delegates from Europe, USA and South America. In Orlando in September 2018 the WBF celebrates its 60th anniversary.
Baron Robert de Nexon, from France, an inspiring figure in bridge, was elected as first President.
Charles J. Solomon, from USA (1964-1968) succeeded him as President, followed by Count Carl Bonde, from Sweden (1968-1970).

With the election of Julius Rosenblum in 1970, the WBF started to assume the mantle of a real World Organisation. Rosenblum strongly believed that bridge needed to have a visible central organisation with a global reach

rather than conducting its affairs on a local or continental basis. When in 1976 Rosenblum decided to retire for health reasons, Jaime Ortiz-Patiño from Switzerland, was elected President.

Under his guidance the WBF started its new modern era and in August 1977 was incorporated under the Laws of the State of New York as a “not for profit” organization. The Federation cast off the mantle of a paternalistic organization and was re-structured as an International Federation devoted to offering its member countries, the National Bridge Organisations (NBOs) the best possible service. The stimulation given by Ortiz-Patiño to building the organizational and administrative structure, to developing the discipline and its image, to introducing new rules and a rigid code of ethics is still effective even today. When he left the WBF in 1986 he was elected President Emeritus by acclamation for his exceptional services to bridge.

Denis Howard, from Australia, succeeded him to the Presidency from 1986 to 1990.
Re-elected for a second term, Howard resigned in January 1991 following a crisis within the world of bridge. Ernesto d’Orsi, from Brazil, who had distinguished himself as a leading bridge administrator succeeded him in 1991 and 1992 and successfully steered the WBF through this difficult and delicate situation. In August 1992 he left the chair to Robert S. Wolff, from the USA, one of the most successful players in the history of bridge, who successfully completed the task started by d’Orsi and until August 1994, when José Damiani, from France, was elected President.

José Damiani completely changed the way forward, both for the WBF and Bridge itself. Under his leadership, following its initial recognition as an International Organisation in 1995 pursuant to Article 29 of the Olympic Charter, the WBF was recognised by the International Olympic Committee as an International Sports Federation in 1999. In October 2000 in Monaco, the World Bridge Federation was admitted as a member of the GAISF (General Association of Internationals Sports Federations – Olympic and non-Olympic) at the General Assembly of this Association. GAISF later became SportAccord, but has now reverted to it’s origins as GAISF.

The WBF also became a member of ARISF (Association of Recognised International Sport Federations) and in October 2002 moved its headquarters to Lausanne (Switzerland), the Olympic City, where it is incorporated under Swiss Law. The WBF is one of the founder members of IMSA (International Mind Sports Association) which was formed on 19 April 2005. The WBF is recognised by FISU (International University Sport Federation), which organises the World University Bridge Championship every two years and UNESCO (United Nation Educational, Scientific and Cultural Organisation) and is Code Signatory of  WADA (World Anti-Doping Agency).

José Damiani left the chair in November 2010 after 16 years of Presidency, having achieved tremendous success in the development of bridge. He introduced new concepts of communication and information, which attracted media, sponsors and supporters; improving technological systems to manage and run the Championships and other competitions, creating new events in which players of all categories could participate, and developing youth bridge, constantly supporting and improving the teaching of bridge and creating the opportunity for school children to be taught bridge from an early age. When he left, he was elected WBF Chairman Emeritus by acclamation for his extraordinary services to bridge and subsequently, following the death of Ortiz-Patiño in 2013, elected President Emeritus.

Gianarrigo Rona, from Italy, former First Vice-President and EBL President (1999-2010) was elected WBF President in São Paulo September 2009 and took the chair in Philadelphia in November 2010. In Nusa Dua, Bali, November 2013, Rona was re-elected unopposed and again in Lyon, August 2017 for a third four-year term which will thus run until 2022. 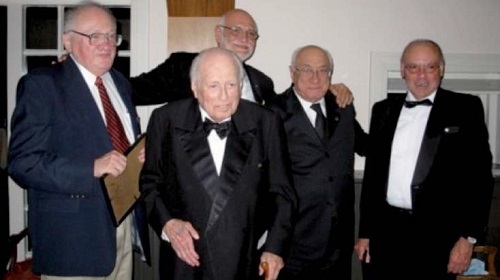 Under the Rona Presidency, the WBF Headquarters was settled in Lausanne,  Switzerland, employing personnel and finalising the requirements for incorporation under Swiss Law. The structure and the legal status of the WBF were clearly defined. Since 30th January 2014  the World Bridge Federation, founded on August 18, 1958 in Oslo, is recognised as a non-profit making organisation of a strictly civil nature, incorporated under Swiss Laws and registered in the Commercial Register in accordance with art. 60 ff. of the Swiss Civil Code.

The Disciplinary Code, the Eligibility Code, the Code of Ethics, the Dress Code, the Players Committment Form, the Reviewer, substituting the Appeal Committee, the Antibetting Regulations, the WBF Sentencing Guidelines, the HLPC Express Line were adopted as well as the Tournament Directors Official Register and Rules & Regulations. Afterwards the Sport Integrity Declaration and the IOC Code of Prevention were introduced.

The Constitution and the By-Laws were updated in conformity with the Olympic Charter and the IOC Principles, respecting the fundamental principles of democracy, transparency and separation of powers. Disciplinary Organs consisting of a Disciplinary Panel, an Antidoping Hearing Panel and the WBF Tribunal were instituted with autonomous competence and jurisdiction on juridical and disciplinary matters.

The format of the World Bridge Games was modified with the introduction of the National Pairs Championship, following the National Teams Championship, as well as the format of the World Bridge Series with Mixed, Open, Women and Seniors events both for teams and in addition World National Teams Championship was expanded with the introduction of the National Mixed Teams and an increase in the number of the qualified teams. In the Youth Championship new categories of Girls (up to 25) and Kids (up to 15) were added to the already existing Juniors (up to 25) and Youngsters (up to 20). In Orlando in 2018 the E.C. decided to rename the youth categories in Under 26 Open, Under 26 Women, Under 21 and Under 16.

Great attention was given to the development of bridge with particular emphasis on youth and school bridge and the Youth Fund and the Development Fund were instituted to accomplish and support the objective. The World Youth Online Bridge Teams Championship was launched as well the WBF Online Robot Tournaments and periodical Zonal Seminars for Officers and Zonal Courses for Tournament Directors.

“Bridge is a Sport and, as such, its place is here like other Sports” declared the IOC President Juan Antonio Samaranch on 7 September 1998 at the Opening of the 1st IOC Grand Prix for Bridge at the Olympic Museum in Lausanne, on realising that he was watching a true competition.

In August 2018 Bridge had the great privilege and honour, thanks to the efforts done by Mr. Michael Bambang Hartono, Chairman  of the Indonesian Bridge Federation and M.me Esther Chodchoy Sophonpanich,  APBF  President.  to be included and compete in the Asian Olympic Games in Jakarta, Indonesia, together with all the other Sports.

In Orlando on 27th September 2018 the Congress approved new WBF Statutes and endorsed the new WBF By-Laws, provided by the Executive Council, not only in conformity with the Olympic Charter and the IOC Principles, but also respecting the fundamental principles of democracy, transparency and separation of the powers. These provide a  Charter that will provide the foundation for the future of the Federation.

For purposes of administration and furtherance of its objectives and to comply with the International Olympic Committee’s principles of the five IOC rings, the WBF structure is divided into five geographical Continental Conferences identical to the IOC’s five rings. For organisational reasons the WBF established zones within each of the five Continents which, although part of a Continent, shall be entitled to have at least one member on the Executive and berths at the WBF Championships. Each zone has its own Zonal Conference of its member NBOs, organising, managing and administering its activity and conducting both its own zonal competitions and those delegated to it by the WBF. The eight Zonal Conferences are:

Each National Bridge Organisation agrees to fulfill certain requirements, such as opening its ranks to all its citizens and residents and upholding a standard of ethics acceptable to the WBF.

“Bridge for Peace” is the official motto of the World Bridge Federation which is partner of “Peace and Sport”, l’Organisation pour la Paix par le Sport’. 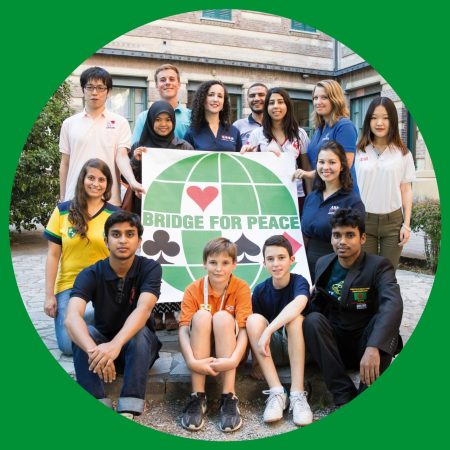 “To defeat hatred we play the Card of Peace”