Bridge is the ultimate trick-taking card game, easily the greatest source of enjoyment that four people can have with a pack of cards.

Bridge is a sport: the World Bridge Federation is recognised by the International Olympic Committee. Just like every sport, Bridge offers enormous benefits to its players.

It is enjoyed by tens of millions of people throughout the world – more so than any other card game. In social circles it is considered the card game. Whether you play casually among friends or seriously in clubs and tournaments, you will find it to be fascinating, challenging and enjoyable.

The card game known as bridge has ancient roots dating back to the dawn of time. Of its direct ancestor, “Whist”, we have confirmed knowledge in England since the 16th century, when it was commonly played among the humbler classes. The game began to attract also the more privileged classes and its success grew to the extent that in 1742 Sir Edmond Hoyle codified it with specific rules in his “Short Treatise”, published in London, on the game’s technique. The popularity became such that the expression “according to Hoyle” became synonymous of exemplary conduct even beyond the card game. Hoyle’s intuition was to contextualise a good card game conceiving it as a social vehicle with deep moral significance. And this is still today the main reason for the success of the game.

The game is still individual and only in 1873, in Buyukdere on the Bosphorous “Whist-bridge” is introduced, like the modern version with four players in two competing couples. At the same time, in the Middle East, a similar game of Russian origin, “Biritch” included in the whist-bridge category gains popularity. This has led to the still unresolved dispute as to whether the name of the game derives from the term ‘bridge’ as that which is cast between the players of a couple or, instead, it derives simply from the euphonic transposition of the term “biritch”.

Whist-bridge is gradually modified and the hierarchy of the suits takes on its final and present configuration (spades, hearts, diamonds and clubs), the determination of the trump card is still casual and left to the dealer or the latter’s partner. In 1892, the American John T. Mitchell publishes a book on how to play competition whist and the first American championships are held.

With the advent of the 20th century, the game rapidly evolves. In 1904, F. Roe introduces “Auction bridge”, the rules of which begin to include the determination of the trump suit by means of an auction amongst players and the game immediately gains widespread popularity in France and in the United States.
In 1918, “Plafond bridge” is introduced in France with slight variations. In 1925, thanks to American Harold S. Vanderbilt, the “Contract Bridge” rules are endorsed by the Portland Club of London, the Whist Club of New York and the Commission Française de Bridge, the most authoritative and respected bodies with regard to the rules of the game and sporting ethic. These rules are still in effect today.

In the United States, between 1927 and 1932, the game’s popularity soars thanks to Ely Culbertson, an immigrant of Romanian origin, who had married Josephine Murphy, considered to be the top Bridge player in the United States, and who in 1929 founds the first bridge magazine, “Bridge World”, still today one of the most distinguished publications on the subject.

In 1958, the World Bridge Federation – WBF – is founded in Oslo, replacing the International Bridge League, and taking on the task of supervising international bridge activities, coordinating relations among the various participating nations and regulating the rules of the competitions.

Bridge as a Sport 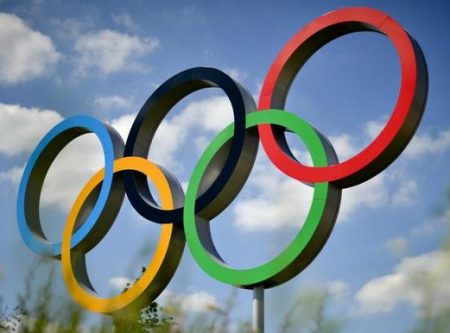 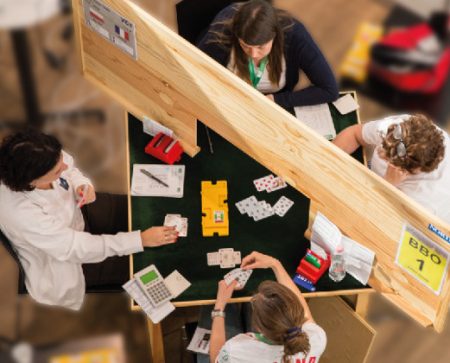 The four players form two partnerships, taking the points of the compass. North plays with South and East with West. Each player receives thirteen cards (your hand) which should be sorted into suits: spades, hearts, diamonds and clubs.

The game is divided into two phases, bidding and play.

In the first phase the partnerships use the bidding to determine which player will be the declarer and how many tricks he or she must win with the chosen trump suit (or without trumps if desired).

The second phase sees both sides attempting to win as many tricks as possible.
Once you have learnt to play the world will become your oyster. Aside from playing social bridge with friends you might join a bridge club. That could lead to you participating in tournaments, both at home and around the world. 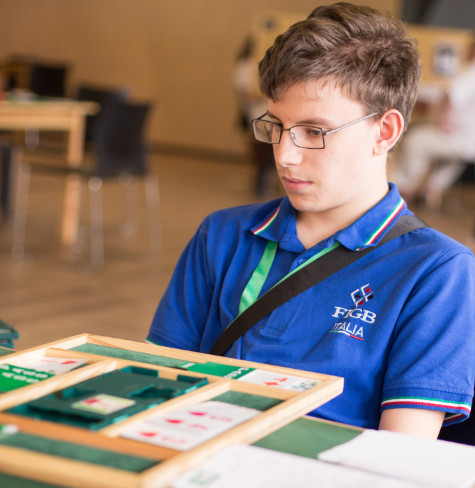 Having shuffled the pack the cards are dealt clockwise, one at a time until each player has 13 cards, after which the bidding phase begins.

Each bid must state a number from one to seven, which is the number of tricks in addition to six that the bidder agrees to try and win. Each bid must specify the suit (spades, hearts, diamonds or clubs) that will be trumps (or notrump if the bidder wishes to play without a trump suit).
If a player does not wish to bid he may Pass.

Each successive bid around the table must name a higher number than the preceding bid, or name an equal number in a higher ranking suit (or notrump). For bidding purposes notrump is the highest rank, followed by spades, hearts, diamonds and clubs. There are 35 possible bids, from 1♣ (lowest) through 7NT (highest). No bid can exceed seven since a bid of eight would be a statement to win 14 tricks — clearly impossible with only 13 tricks in play.

For example, if the opening bid is 1♠, the next bid by any player may be 1NT or two or more in any suit or notrump. No player may bid 1♣, 1♦ or 1♥. The bidding cannot go backwards!

It is also possible to use two other specialised bids, double & redouble.
Any player, at his turn, may double the last preceding bid if it was made by an opponent. The effect of doubling is to increase the scoring value should the doubled bid become the final contract.
A player may redouble, at his turn, only when the last bid was made by his side and doubled by an opponent. The effect of a redouble is to increase the scoring values even further.
Any player may bid over a doubled or redoubled bid, provided the new bid is higher than the current one. If this is done, all previous doubles and redoubles are cancelled.
When any bid, double or redouble is followed by three consecutive passes in rotation, the bidding is closed and the final bid becomes the contract. If the contract names a suit, all cards in that suit become trumps. If the contract is in notrump, the deal is played without a trump suit. 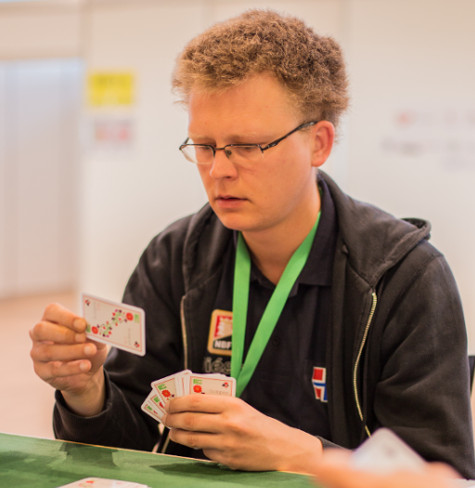 A play consists of taking a card from your hand and placing it face up in the centre of the table. Four cards so played, one from each player in clockwise rotation, constitute a trick.

The first card played to each trick is called the lead. The defender to the left of the declarer must make the first lead on each deal. This is called the opening lead.

Immediately after the opening lead is made, dummy spreads his entire hand face up, neatly arranged into suits for all players to see. If there is a trump suit, it should be placed on the right as viewed by the dummy. As viewed by declarer, trumps would be on the left.

The player who is dummy does not select his own cards during the play. Declarer must play his own hand and the dummy’s hand, although each hand must be played from in proper turn. All four players are responsible to see that declarer’s plays from the dummy are legal, i.e., following suit when able.

The player who is dummy may warn another player against infringing any of the rules. For example, if clubs are led and declarer plays a spade from his hand, dummy might inquire, “No clubs, partner?” to prevent a revoke (failing to follow suit when able).

Each completed trick is gathered and turned face down on the table. Declarer should keep all the tricks won by his side neatly arranged so that it is apparent how many tricks have been won and the order in which they were won. The defender who first wins a trick should do the same for all the tricks won by either defender.

After all 13 tricks have been completed, play is over. Both sides must agree on the number of tricks won by declarer then the deal is scored.

Still curious? Give a look at this!

Bridge may improve your health.

It is believed that Bridge can enhance team spirit, socialization, the development of mental abilities and helps the brain to stay young and healthy. 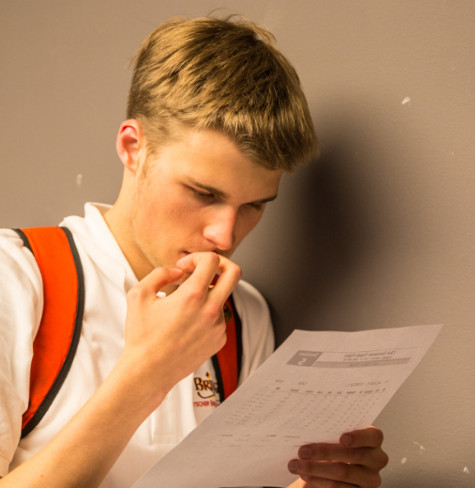 Dr. Christopher Shaw researched the impact that learning to play Bridge would have on elementary students. The researcher from Carlinville (Illinois) found out that kids who learn to play Bridge have an astounding increase in their test scores compared with their non-playing classmates. The game helped students in all five subject areas of the Iowa Test of Basic Skills. During game, players analyze the available information and make a plan for success based on their first understanding of the situation. The ability to adapt and adjust the plan when additional information becomes available leads to success in the game. Thus, Bridge dramatically helps the development of inferential thinking, which leads to better performances in all subject areas, not just math and science.

The results of a research by Louise Clarkson Smith and Alan A. Hartley (Journal of Gerontology – Vol 45, Issue 6, pp 233-238) on Bridge players and nonplayers aged 55-91 indicated that players outperformed nonplayers in measures of working memory and reasoning. 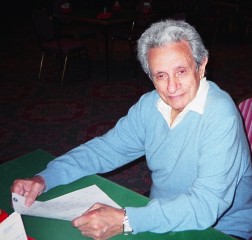 Benito Garozzo (pictured left), number 2 in the World overall ranking, will be 90 this year. After 10 world titles, he still plays at the top level: in 2013 he won the silver medal at the European open Championships.

Bridge also improves teamwork skills: the player needs to depend on information from his/her partner before making decisions. Thus, Bridge teaches how to trust and communicate with others for mutual gain.

Listening, etiquette, concentration, dealing with winning and losing and many other social skills can be enhanced by playing Bridge.

Bridge offers many social benefits. It is a way to make new friends all over the world, but also provides the opportunity to make social contacts that can assist players in their business. Bridge players have the opportunity to meet Bill Gates at the table! The founder of Microsoft is the most astounding but for sure not the only one testimonial of Bridge – many brilliant minds of our times are devoted to this mind sport (see Testimonials).

See a comprehensive list of websites; originated and maintained by Alvin Levy – email any comments.