Inaugurated in 2019, this new event takes places in conjunction with Bermuda Bowl, Venice Cup and d’Orsi Seniors Trophy. The event took the name of the City of Wuhan who presented the prestigious trophy and provided and will provide for the future editions replicas for the winners. 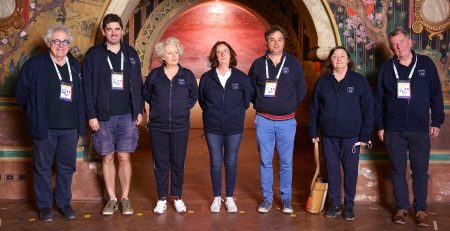 To find all the details of the Championship include results, bulletins, photographs etc. please click here.

After four sessions of the final France led by 25 IMPs and they kept their opponents at bay winning 199-163.

Bénédicte Cronier gained her 16th medal. Five of those are gold. Apart from a Mixed Pairs bronze in 2018, all the others were in the Women’s series. Philippe has five medals; next to the two mixed medals he won with his wife, he has two Open team bronzes and a Senior team gold (2014). Vanessa Reess has won three medals on Women’s teams, she also has a bronze from the 2001 Transnational. Joanna Zochowska has four medals, also including two Venice Cup wins. Pierre Schmidt has a silver from the 2016 Senior teams.

Debbie Rosenberg is up to five medals, two golds and a silver in Women’s teams and a gold in the 2002 Women’s Pairs. Migry Zur-Campanile has three medals, including a gold in the 2000 Transnational Mixed teams. Chris Willenken gains his second silver in Mixed teams, he has another silver from the 1999 Junior teams. Eldad Ginossar previously won an Open team gold (representing Israel). Irene Baroni won her second bronze medal after the 2018 McConnell. Alessandro Gandoglia adds a bronze to his 2015 Junior team gold. Michael Gromöller won bronze in the 2009 Transnational Open teams. Daniela Von Arnim won her 10th medal, which includes two Venice Cup wins.

The first edition of the Wuhan Cup was very exciting. In one of the semi-finals was a close dramatic match between Russia and Romania. The match ended in a tie (174-174) which meant that Russia moves on the final on the basis of having won their direct match in the Round Robin. The final was another nail-biting affairs where Russia prevailed against USA1 175-170. Romania defeated England 190-166 fpr the Bronze Medal.