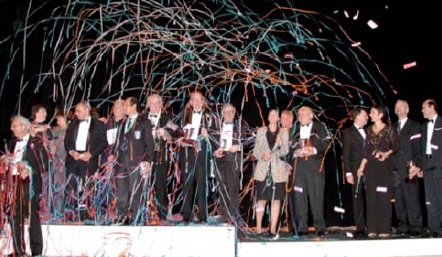 The World Bridge Teams Olympiad, today the World Bridge Games, inaugurated in Turin, Italy in 1960 was the first competition to be set up by the WBF itself, the Bermuda Bowl already being well established when the WBF was founded in 1958. Harold S. Vanderbilt, the inventor of modern bridge scoring, endowed the new event with a handsome cup, the Vanderbilt Trophy.
The World Seniors International Cup was introduced for the first time in Maastricht, in 2000, alongside the World Teams Olympiad, took place. 24 National Senior Teams participated, and the Cup was won by the USA team. Robert Wolff was a member of the winning team and by doing so became the only player ever to win World Championships in five different events. 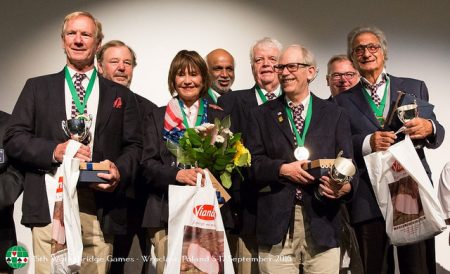 24 Senior Teams attended the 15th edition of the World Bridge Games in Wroclaw, Poland.
USA defeated France 194-156.Trailing by 51 going into the final set, France outscored USA 37-0 over the first five boards but could muster only 3 IMPs over the final 11 boards as the Americans scored 24 IMPs. It is the second straight Senior Teams title for USA. 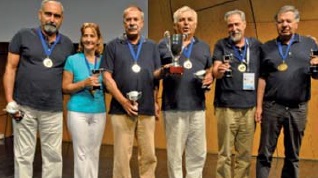 The 2012 World Bridge Games were again held under the aegis of the World Mind Sport Games; however on this occasion it was a smaller event as the Junior events which had swelled the number of players so greatly in Beijing were not staged on this occasion. 60 Open Teams, 43 Women’s and 34 Senior Teams entered the Games, with the Open Championship seeing a strong Swedish team winning comfortably, beating Poland 371-234; the fancied team from Monaco came third, beating Ireland in the play-off to take the Bronze medal. In the Women’s Championship, England retained their title, winning the event by 209-140 against Russia, with Poland beating France and taking the Bronze Medal. In the increasingly popular Seniors Championship, again played with a very strong field, the Hungarian team beat USA in the Final to take the title, with France comfortably taking the Bronze against Sweden in the play-off. 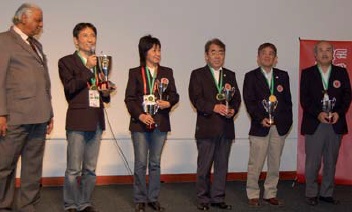 After the 29th Summer Olympic Games in August and the 13th Paralympics that followed in September, China was not yet finished playing host to the rest of the world in 2008: at the beginning of October the stage was set for the first edition of the World Mind Sports Games (WMSG), a gathering of some 3000 people from over 140 countries and regions competing in one of five disciplines: Bridge, Chess, Go, Xianqi (Chinese Chess) and Draughts. Media coverage, perhaps building on the standards established at the Olympics and Paralympics, was extensive, with nightly Chinese TV broadcasts and daily newspaper reports. The World Bridge Teams Olympiad assumed its new name of World Bridge Games and was incorporated in the World Mind Sport Games. With approximately 2,000 players from 92 countries participating, Bridge was the main event at the WMSG. The Open and Women’s events commenced with six days of round robin competition (16-board matches, IMPS converted to VP) in seeded groups of 16-18 teams to qualify 16 teams for the knockout stage. The 71 teams in the Open series (one short of a perfect 72) were seeded into four groups, each producing four teams for the Round of 16, the winner of each group earning the privilege of choosing its opponent from the third- and fourth place finishers in its companion group (A with B; C with D). Once those selections were made, the rest of the draw was completed in accordance with a pre-determined formula, so winning the group was, at least in theory, a significantadvantage. In the 96 board final a highscoring first set gave Italy a 16-IMP lead, but the second set was much more dynamic: Italy won it 46-4 to lead by 58 one-third of the way through the match. The young English team fought back with two good sets of their own to cut the deficit to 20 with 32 to play. Italy gained 15 IMPs in Segment 5, and conceded only 5 IMPs over the final 16 boards to win the first WBG Open Teams under the WMSG umbrella, effectively defending the Olympiad Open Team title earned in Istanbul in 2004. The final margin in the well played final was 30 IMPs. This gave Italy its sixth title in this competition, increasing its impressive record. Norway added the bronze to its remarkable collection of medals. In the Women’s event, the final was a match that will be discussed for years. Who knows how great the pressure was on the Chinese women to win the World Championship on their home turf, with the greatest national media coverage the sport had ever received? But in the end England won by 1 IMP! 32 teams entered the Seniors and were seeded into two groups of 16, with half the teams in each round robin group qualifying for the knockouts. The field was very strong at the top. So many matches were like “A Tale of Two Cities” with shades of ‘the best of times’ and the ‘worst of times’. Take this one, for example, in which highly fancied USA came out of the chute like a bull bent on wiping out anyone unfortunate enough to get in its way. The Americans won the first set 60-28 and tacked on 4 and 7 IMPs in the next two to lead by 43 at the end of the first day of play.
But the new day brought a dramatic change of momentum: Japan won Sets 4 and 5 by identical 44-12 scores to take a 21-IMP lead into the final stanza.

The 12th Bridge Olympiad was staged in Turkey, and despite some forebodings over the choice of venue, resulted in one of the most successful such events ever held. The Open Series once again had 72 competing teams, and the Women’s series saw 43 teams participating.
As before, the Open Teams were divided into four sections and the Women’s teams into two sections, playing a complete round robin to determine the teams to go through to the Knock Out phase. Italy took the Open title once again, defeating The Netherlands in the Final. Russia defeated China in the play-off to take the Bronze Medal. Winning the World Bridge Games created two new Italian Grand Masters – Fulvio Fantoni & Claudio Nunes. In the Women’s series, the surprise of the Championship came when a young Russian team took the Gold Medal defeating the experienced USA team. England took the Bronze Medal, defeating China in the playoff. In the Seniors Teams the entries increased with 29 teams taking part. USA again took the title, although with a completely different team.

The 11th Bridge Olympiad was held in Maastricht, the Netherlands, 40 years after the first Bridge Olympiad in 1960. Another record was achieved in the Open Series, where there were 72 competing teams divided into four sections each playing a complete round-robin. For the first time the knockout phase started with a round of 32, followed by quarter-finals, semi-finals and the final.
40 teams competed in the Women’s series, being divided into two groups for the Round-robin, which again determined the teams to enter the round of 32. In the closely fought Open teams final, Italy defeated Poland by 269-249 to take, after 28 years, its fourth gold Olympic medal. For the second time in the history of the Olympiad, this was to be the first of three successive Olympiad victories gained by Italy. For the first time, the three countries of England, Scotland and Wales competed under their own flags instead of as Great Britain, with England reaching the bronze-medal play-off where they lost to USA.
In the Women’s Series, the USA team defeated Canada by 176-144, while Germany took the bronze medal in a play-off against Norway.
The World Seniors International Cup was introduced for the first time in Maastricht, alongside the World Teams Olympiad, took place.
24 National Senior Teams participated, and the Cup was won by the USA team. Robert Wolff was a member of the winning team and by doing so became the only player ever to win World Championships in five different events.