The 2019 World Wide Bridge Contest will be played on Friday 7th and Saturday 8th June with prizes including entry to the 2020 World Pairs Championships.

Click here for more information and details of how to enter your club to participate in this exciting and challenging contest.

A brief history of WWBC 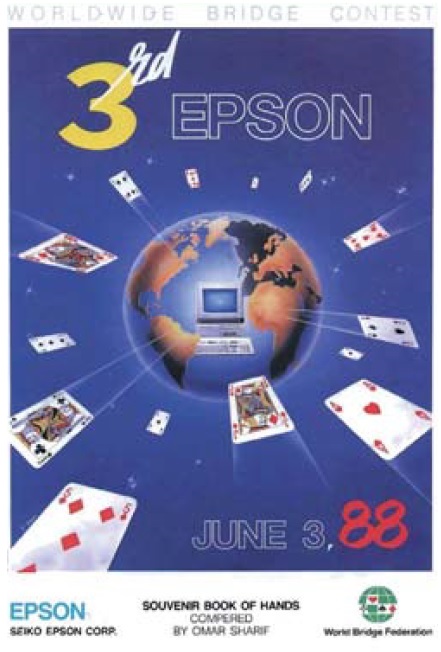 This is an annual event, born in 1986, with no limit to the number of centres, all playing the same boards across the world.

The contest is open to clubs and other organisations in the territory of every National Bridge Organisation invited by the WBF to participate. Established bridge organisations in territories not yet affiliated to the WBF may be considered for invitation under special conditions.

WBF Year Points are awarded to the leading pairs in the rankings, both overall and for zonal and national rankings. Most NBOs also award their own Master points, usually on a scale appropriate to a national simultaneous Pairs.

In 1987, the Epson World Wide Bridge Contest was recognised as the biggest sporting event of all time and, as such, was published in the Guinness Book of Records. It was mentioned again in both 1988 and 1989.

The poster for the third Epson World-wide Bridge Contest won the first prize in a major sponsorship competition, poster section, in March 1988.