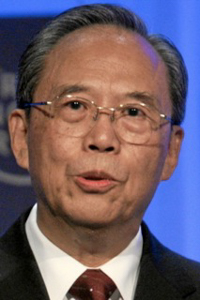 Zeng Peiyan, from Shaoxing, China was elected President of the WBF Congress in 2012.
Zeng is one of the pre-eminent figures in the development and affirmation of the Chinese bridge movement.
He served as Vice Premier of the Chinese State Council from 2003 to 2008.
He is now Chairman of the China Center for International Economic Exchanges.