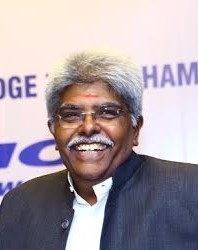 N.R.Kirubakaramoorthy, born in 1951 at Tuticorin and living in Chennai, India, manager of the family company founded by his father, has been elected to the WBF Executive Council in 2019.
He started to play bridge at 20 and he won several India Major Championship, becoming member of the India Open National Team. In 2000 Moorthy was elected President of the Tamil Nadu Bridge Association and then President of the Bridge Federation of India until 2016.
He was the organiser of the 42nd World Bridge Teams Championship, the first WBF event hosted in Asia and Middle East and very successfully held in Chennai in 2015.