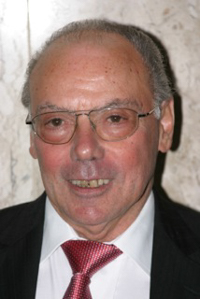 José Damiani from Paris, France, studies in law and economy, entrepreneur, was unanimously elected as WBF President Emeritus by acclamation in March 2013. He was President of the French Bridge Federation from 1978 to 1983, President of the European Bridge League from 1987 to 1995, when he was awarded with the EBL Gold Medal and was elected as EBL President Emeritus by acclamation. President of the WBF from 1994 to 2010 when in Philadelphia, following his retirement, was awarded the title of WBF Chairman Emeritus. Prior to his election as WBF President, he was 1st Vice- President and has been a member of the Executive Council since his first election in 1981 (he was proxy in 1979 and in 1980). During his presidency the WBF in 1996 obtained the patronage of UNESCO for the teaching of bridge in the schools and in 1999 the WBF was recognised by the IOC as International Sport Federation. In 1998 was elected member of the WBF Committee of Honour (whose he is now Chairman) and awarded the WBF Gold Pin. In 2001 he received from IOC President Juan Antonio Samaranch the IOC Golden Diploma. He was made IBPA Personality of the Year two times: in 1986 and 2001. He is Founder President of the International Mind Sport Association, by him constituted in Monaco 2005 with the four founding Federations (WBF, FIDE, FMJD & IGF), of which he was President from 2007 to 2013. As bridge player he achieved the title of World International Master. In 2004 he was awarded with the Order of Officier de la  Legion d’Honneur by the President of the French Republic and with the Gold Medal “de la Jeunesse et des Sports”.