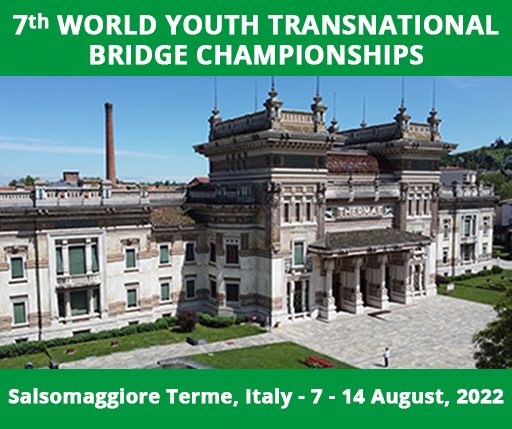 Individual:
There was just one tournament for four series: The top two both played in the U21 series:
Gold: Panagiotis Skordas (GRE)
Silver: Finn Kolesnik (USA)
Bronze: Cheung Wai Lam (HKG)
In all four series, one individual was named as the best after the medal winners.
Kevin Rosenberg (4th) was the best U26 player.

Individual:
Panagiotis Skordas and Finn Kolesnik (both U21 players) came first and second in the Individual.
Franciszek Kurlit (5th) was the best U21 player after the medal winners.

Finn Kolesnik and Michael Xu (see above) as well as Christian Lahrman and Léo Rombaut win two medals here in Salsomaggiore.
Christian previously won gold at the U16 Pairs in 2015 and is already a member of the Danish Open team. Léo, son of 2017 Bermuda Bowl finalist Jérôme Rombaut, won silver himself in U16 teams in 2018.
Kacper Kuflowski and Franciszek Kurlit won two medals (bronze in pairs, silver in teams) at U16 level in 2019. Michał Staśik was also on that silver-winning team in 2019.

Federica and Valentina Dalpozzo are also double medallists here.
Valentina previously won gold in the U26 Women Individual in 2019. They are now joined by a third sister, Eleonora. We believe this is the first time that three siblings are on the same medal-winning team. With two sisters on the bronze-winning team as well, Bridge is clearly a family affair in Italy.
Thea Lucia Indrebø and Agnethe Hansen Kjensli have won their fourth medals, after bronze in U26W teams in 2016, and two medals in 2019, gold together in teams, and gold (Thea) and silver (Agnethe) in the pairs.

Brian Zhang, Anshul Bhatt and Darwin Li are among the ten players to get two medals here.
Not surprisingly, none of these players have medalled before.
These are the very first World championship medals won by players from Estonia, which thereby becomes the fiftieth nation to have done so.

Individual:
Oskari Koivu (9th) was the best U31 players after the medal winners.

Dimitrios Konstantinos Balokas and Ioannis Oikonomopoulos complete the set of ten double medallists in Salsomaggiore in 2022.
Jamie Thompson previously won silver in U26 Pairs in 2019, while Ioannis Oikonomopoulos won bronze at U26 teams in 2015.
The entire gold-winning team in the U21 category in 2019 (Bazyluk, Cichy, Kiełbasa, Kopka) were here successfully playing under-31. Kiełbasa and Kopka also won gold in the pairs in 2019. Kacper Kopka furthermore has a silver medal from the 2015 U16 pairs. The fifth member of Agnieszkas Angels, Patryk Patreuha, won silver in the 2019 U21 Individual.
Alessandro Calmanovici won the BAM (representing Italy) in 2015.