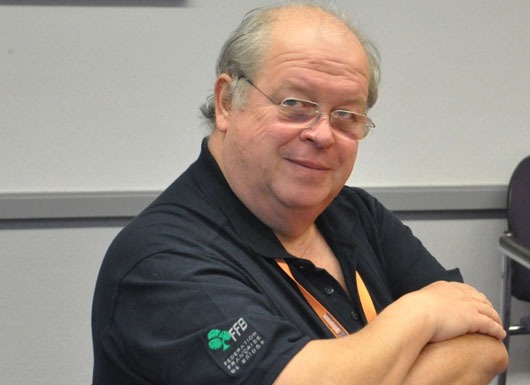 I was very sad to hear of the death of Patrick Grenthe, one of those few people who seem able to manage various careers at the same time. He was CEO of a well known company, Choky Tropico, President of the bridge club of Lille and a first class player becoming World Champion in the d’Orsi Seniors Bowl 10 years ago in Veldhoven and thus a World Senior Grand Master.  Together we organised the biggest World Bridge Series ever in Lille 1998 and he was also a significant member of the organising committee for the World Bridge Games in Lille in 2012

That was during his first term of President of the French Bridge Federation, during which time he also succeeded in having bridge included as a subject within the French school curriculum with the official agreement  from the Ministry of Education.

During his second term ( re-elected with 98% ! ) he arranged for the World Bridge Teams in Lyon 2017 which was also very successful.

Patrick was more than a good friend of mine, more like an adopted brother for something like 40 years and we had many opportunities to share what he loved  more than anything else, bridge games, lunches or dinners. He was extremely fortunate to have his family as bridge lovers too, his wife Dominque, and his two sons Guillaume and Jérôme who were juniors world vice champions.

I am sure that the whole bridge community will join me in addressing to Dominique, Guillaume and Jérôme as well as to their daughter and sister Aurélie our deepest condolences and all our sympathy Through them and all his achievements Patrick will remain for ever in our memory and still present in many occasions where we will think he is always with us