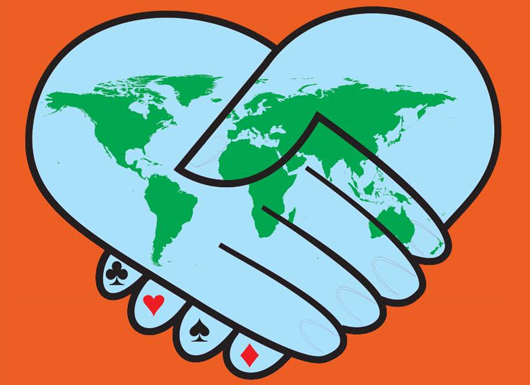 Academics at the University of Stirling are bridging the gap between generations – as well as the local community – by inviting people to join a new bridge club. The University Bridge Club has been set up as part of a series of research projects into the health and well-being benefits of playing the card game.

The first study, funded by English Bridge Education and Development (EBED), compared the responses of more than 6,400 bridge players with over 10,000 responses from wave six of the English Longitudinal Study of Ageing. It found that those who play bridge have higher levels of well-being than those who do not play.

The new club will also help build intergenerational relationships within and beyond the University.

Professor of Sociology Samantha Punch – who is an international bridge player – is leading the research together with Dr Caroline Small, an Honorary Senior Lecturer at Imperial College, London.
“The new University Bridge Club has the potential to enable people to maintain good health, through increased positive cognitive, social and quality of life outcomes,” said Professor Punch.
“As well as contributing to healthy ageing and brain fitness, participation in the mind sport of bridge also enhances social networks and a sense of belonging to a wider bridge community.”

Ronan Valentine, an English undergraduate student who is helping to set up the club, represents Scotland at Junior Level. He will participate in the 14th European Youth Pairs Championship in Opatija, Croatia, next week (11-18 July 2018).  Meanwhile, Professor Punch is part of the first Scottish Women’s Bridge Team to qualify for the World Championships.
They were one of the top eight teams at the 54th European Bridge Team Championships in Ostend, Belgium, last month – earning themselves a place in the next World Bridge Teams Championships in China next year.

As part of the next stage of the research, the University, in partnership with EBED and the UK and Irish Bridge Unions, is funding a three-year PhD studentship in the Sociology of Bridge.
This collaborative research project will look at what drives people to take up bridge and keep playing throughout their lives. It will also explore the role a hobby can play in friendships and personal communities, as well as how it creates a sense of belonging and collective identity within and across generations.

The Scottish Bridge Union is funding free taster bridge sessions in the University library on 25 July and 15 August, between 5.30-7.30pm. For more information about the Bridge Club, email: stirlingunibridgeclub@gmail.com

Media enquiries to Rosemary Free, Communications Officer, on 01786 466 169 or rosemary.free@stir.ac.uk

The University of Stirling is ranked fifth in Scotland and 40th in the UK for research intensity in the 2014 Research Excellence Framework. Stirling is committed to providing education with a purpose and carrying out research which has a positive impact on communities across the globe – addressing real issues, providing solutions and helping to shape society.

Interdisciplinary in its approach, Stirling’s research informs its teaching curriculum and facilitates opportunities for knowledge exchange and collaboration between staff, students, industry partners and the wider community.

The University’s scenic central Scotland campus – complete with a loch, castle and golf course – is home to more than 14,000 students and 1500 staff representing around 120 nationalities. This includes an ever-expanding base for postgraduate study.