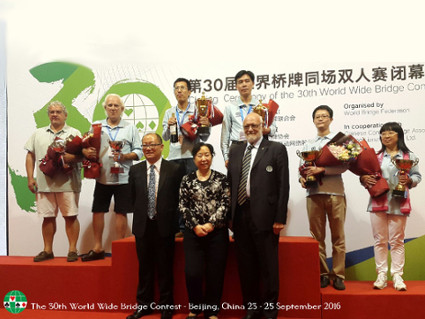 Organized by the WBF in cooperation with CCBA & OurGame

The qualifying heats of 2016 World Wide Bridge Contest were staged over six days, two in April, two in May and two in June in order to qualify 13 pairs for the Final to be held in Beijing, China from 23rd – 25th September, joining 7 pairs qualified from online bridge events in China.

The winning pairs were:

The 13 winning pairs will be selected as follows:

The Continents recognised by the WBF are the 5 Continents of the Olympic Rings: Africa, America, Asia, Europe and Oceania

The winning pairs from the Online heats were:

The highest placed pairs from the other three continents, namely Africa, America and Oceania are the next pairs invited:

Finally the four highest scoring second placed pairs will be invited to the final: