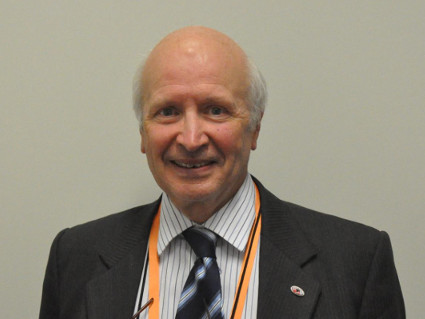 Patrick Jourdain, who was born on 1st November 1942, was bridge correspondent of the Daily Telegraph from 1992 and Wales’ most-capped bridge player with more than seventy appearances over six decades for the Principality in the Home Internationals.

Jourdain was born on 1st November 1942 to a middle-class family in Woking, Surrey. His father, a vicar’s son, worked in the Patent Office, the Lord President’s Office and was then an inspector for the Agricultural Research Council – commuting to London every day throughout the war. He went to Egypt immediately after the war and also took a part in the trade treaty with the Benelux Coutries. His mother was the daughter of a radiologist at Bart’s Hospital, one of the first with a practice outside London. he built his own X-ray machine for his practice in Woking and then gave it to the local hospital.

Jourdain was educated at St. Edward’s School, Oxford where he founded the school bridge club in his last year at school. He served the church as a boat boy when very young and continued all his life to sing (bass) at church Festivals and attend the annual All Saint’s day service on his birthday. He won a scholarship to Peterhouse, Cambridge where, in theory, he read Physics and Natural Sciences whilst actually spending much of his time playing bridge. He was Secretary of the University Bridge Club and played in the 1964 Varsity match.

His first job after graduation was in Operational Research for the GKN Steel Company in Cardiff, which was nationalised shortly after he joined it. In 1965, on the morning the Trials for the Welsh Bridge team were due to start, a player was taken ill. Jourdain was called in as a substitute, and after a few minutes preparation with his new partner, Roy Griffin of Swansea, the pair went on to win the Trials. The Selectors had promised the winners a match and so Wales fielded its youngest ever-player at the age of 23 in the match against Northern Ireland in Belfast in early 1966. For six consecutive decades Jourdain was a regular feature on Welsh teams.

In 1973 Jourdain was promoted by British Steel to run a team in Glasgow designing computer systems for the nationalised company. In bridge two years’ residence of a country qualifies you to represent it, and Jourdain played two matches for Scotland in 1977 helping Scotland win the Home Internationals for the Camrose Trophy. The trophy for the annual bridge match between Scotland and Wales now bears his name.

In 1976 Jourdain had won the Gold Cup, the British knockout Championships, and was already earning money as a writer and teacher of bridge. He took the major decision to switch to bridge fulltime, something that came as a surprise to British Steel who had him on a high-flier list for senior management.

Jourdain returned to Cardiff in 1977 as manager of the main bridge club in Cardiff and bridge correspondent of the Western Mail. He also became the bridge journalist for Channel 4’s teletext section on bridge. After re-qualifying for Wales by residence he became the squad’s most frequent member. From 1982 when he became Editor of the Press Association’s magazine he also understudied GCH Fox, bridge correspondent of the Daily Telegraph, reporting for the newspaper from each World and European Championship.

When “Foxy” retired from the post of correspondent in 1992, retaining the post of columnist, Jourdain became the correspondent, reporting bridge news. On the rare occasion bridge made the front page it was mostly scandal. When a quirky story about a computer coming fifth in a field of the world’s top bridge players in solving bridge problems, made the front page, Jourdain was exhilarated. “Today,” he told a friend, “my words have been read by more people than saw Shakespeare when he was alive!” “Ah”, his friend replied, “but how many of them will remember your words two hundred years after you are dead?”

In 1999 Jourdain was the key person in the exposure of a Welsh international bridge player as a cheat. In such cases allegations are frequent, convictions rare, but once Jourdain realised what was happening he spent months gathering evidence. At the denouement at a Welsh National Championship independent witnesses observed the player exchanging shuffled packs for prepared decks where he knew every card. At the subsequent Laws & Ethics Hearing, faced with the irrefutable evidence, the player confessed and was suspended for ten years. The story made the front page of the Daily Telegraph and was picked up by the media throughout the world.

At the 2002 World Championships in Montreal, Jourdain competed against Bill Gates. At the Press Awards, Jourdain was declared Bridge Personality of the Year. At the time Jourdain supported the addition of Mind games to the Olympics and as a journalist in Montreal he achieved a world scoop. At the time, bridge was trying to get into Olympic Games and had taken up the same drug-testing procedures. On the grapevine he heard a player had refused a drug-test but no name had been released. At the prize-giving banquet he noticed that when the American women’s team went up to get their medals a player was missing. He located the missing player and she told her story of being stripped of her medal for refusing to take the drug test, asking him to make her treatment public. The story made the front page of the Telegraph and was picked up from there by the BBC World News and the main American press and television stations who interviewed the player on prime time television. The following year in Menton for the European Open she spotted Jourdain and came rushing over. “When I told you to make my treatment public,” she said, “I did not expect the whole world to know!”

When in China he played bridge with Deng Xiaoping, a good player, and was commissioned to write the eminent Chairman’s obituary for the Daily Telegraph.

In 2010 Jourdain was organiser of the Buffett Cup bridge match between Europe and the USA that preceded the Ryder Cup golf match between the two. Two of the finest bridge teams ever to compete in Britain saw a win for the USA.

In 2014 Jourdain was on the team that won the first Welsh Premier League. The team represented Wales in the Commonwealth Nations Bridge Championship and won the gold medal. The same team was selected for the 2015 Camrose Home Internationals, finishing a narrow second to the Republic of Ireland. This was Jourdain’s first Camrose season for ten years.

Jourdain was co-author with Terence Reese of “Squeeze Play is Easy” (1980) and on his own wrote “Play the Game Bridge” (1990), “The Daily Telegraph Easy Guide to Acol Bridge” (2005) and Patrick Jourdain’s Problem Corner (2009). At the Cardiff School of Bridge where he was Principal, he taught more than a thousand people to play bridge.

Jourdain was a social golfer and tennis-player. He never married. He is survived by his two older sisters, Jennifer and Susan.