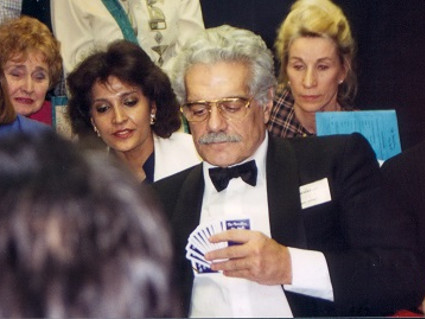 Omar Sharif, actor and bridge player died yesterday of a heart attack in a Cairo hospital.

Omar Sharif, the Franco-Arabic actor best known for playing Sherif Ali in Lawrence of Arabia (1962) and the title role in Doctor Zhivago (1965), was born Michel Demitri Shalhoub on April 10, 1932 in Alexandria, Egypt. Of Lebanese and Syrian extraction, the young Michel was raised a Roman Catholic. He was educated at Victoria College in Alexandria and took a degree in mathematics and physics from Cairo University with a major. Afterward graduating from university, he entered the family lumber business.

He developed an interest in acting and studied at the Royal Academy of Dramatic Art in London.

Before making his English-language film debut with Lawrence of Arabia, for which he earned a Best Supporting Actor Academy Award nomination and international fame, along with two Golden Globe awards, Sharif became a star in Egyptian cinema. His first movie was the Egyptian film Siraa Fil-Wadi (1954) (The Blazing Sun) in 1953, opposite the renowned Egyptian actress Faten Hamama whom he married in 1955. He converted to Islam to marry Hamama and took the name Omar al-Sharif. The couple had one child (Tarek Sharif, who was born in 1957 and portrayed the young Zhivago in the eponymous picture) and divorced in 1974. Sharif never remarried.

He was a fine sportsman, representing Egypt at football, but his passion was bridge.

Beginning in the 1960s, he earned a reputation as one of the world’s best-known players. In the 1970s and ’80s, with Charles Goren, he co-wrote a syndicated newspaper bridge column for the Chicago Tribune. He wrote several books on bridge and licensed his name to Omar Sharif Bridge, which was first marketed in 1992.

In 1967 he founded the Omar Sharif Bridge Circus, which included energetic and quick-witted Egyptian Leon Yallouze as the coordinator, young Mike Ledeen (later to become a world renown terrorism expert) who served as the American Manager of the Circus,  Benito Garozzo, (considered by many as the greatest bridge player of all time) plus his Italian compatriots Pietro Forquet and Giorgio Belladonna and handsome Parisian internationalist, Claude Delmouly. 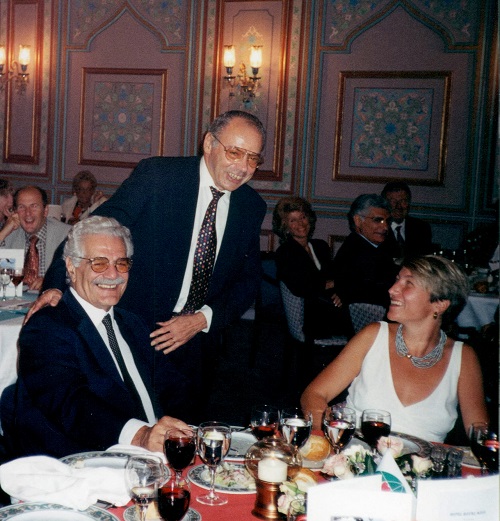 In the early 70’s Omar set up a Rubber Bridge match in London against Jeremy Flint and Jonathan Cansino at the then unheard of stakes of £1 a point. He won £7,000 but lost £100,000 on a film of the match,which was never shown to the public.

In 1991, Omar was a special guest at the World Bridge Championships in Yokohama. A boat trip was organised around the harbour and the TV cameras were out in force. Omar was a bad sailor but when the time came for him to be interviewed he gave a bravura performance.

He had two separate bridge careers: in 1964 and 1968 he captained (and played on) the Egyptian team in the Olympiad, finishing 21st on both occasions.

Then, in 1997, he was a member of the Committee of Honour for the Bermuda Bowl on the first occasion that this was organized in an Arab Country, Tunisia. He competed in a truly transnational team (with French, German and Lebanese players) and finished 11th. Two years later, Omar was asked to join a French entry for the senior teams at the European Championships in Malta. Omar’s team finished second. Another year later, at Maastricht, Omar Sharif joined Egypt’s senior team, finishing in a creditable ninth place. 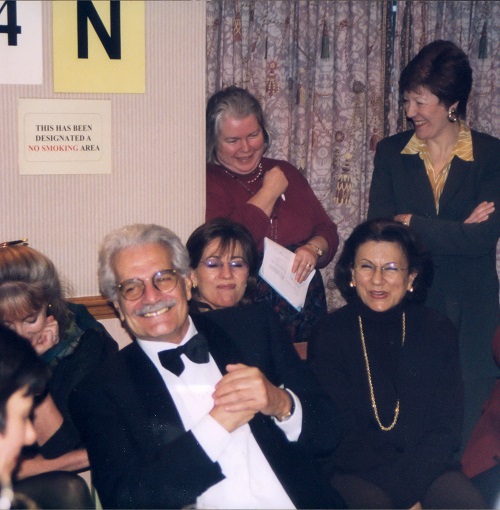 The three French Senior teams in Malta finished in the first three positions and, as was customary at the time, this would mean the public would get to hear the ‘Marseillaise’ performed three times. The Organisers decided to play the theme to Doctor Zhivago instead, which was greeted with great cheers.

Following this breakthrough role in films, Sharif played a variety of characters, including a Spanish priest in Behold a Pale Horse (1964), a Yugoslav wartime patriot in The Yellow Rolls-Royce (1964) and the Mongolian conqueror in Genghis Khan (1965). In the same year, Sharif reunited with Lean to play the title role in Doctor Zhivago, an adaptation of Boris Pasternak‘s novel and won another Golden Globe.

Over the next few years, Sharif starred as a German military officer in The Night of the Generals, as Crown Prince Rudolf of Austria in Mayerling and as Che Guevara in Che!. Sharif was also acclaimed for his portrayal of Nicky Arnstein, husband to Fanny Brice in Funny Girl, though some thought he was miscast as a New York Jewish gambler. His decision to work with co-star Barbra Streisand angered Egypt’s government at the time due to Streisand’s support for the state of Israel. Streisand herself responded with ‘You think Cairo was upset? You should’ve seen the letter I got from my Aunt Rose!’ Sharif reprised the role in the film’s sequel, Funny Lady in 1975.

Among his other films were the western Mackenna’s Gold, as an outlaw opposite Gregory Peck; the thriller Juggernaut, which co-starred Richard Harris, and the romantic drama The Tamarind Seed, co-starring Julie Andrews, directed by Blake Edwards. Sharif also contributed comic cameo performances in Edwards’ The Pink Panther Strikes Again and in the 1980 spy-film spoof Top Secret!

In 2003, he received acclaim for his role in the French-language film adaptation of the novel Monsieur Ibrahim et les fleurs du Coran, as a Muslim Turkish merchant who becomes a father figure for a Jewish boy. For his performance, he won the Best Actor Award at the Venice Film Festival and the Best Actor César, France’s equivalent of the Oscar, from the Académie des Arts et Techniques du Cinéma.

In November 2005, Sharif was awarded the inaugural Sergei Eisenstein Medal by the United Nations Educational, Scientific and Cultural Organization (UNESCO) in recognition of his significant contributions to world film and cultural diversity. The medal, which is handed out very infrequently, is named after Russian director Sergei Eisenstein. Only 25 have been struck, as determined by the agreement between UNESCO, Russia‘s Mosfilm and the Vivat Foundation.

He told the press in 2006 that he no longer played bridge, explaining, I decided I didn’t want to be a slave to any passion any more except for my work. I had too many passions, bridge, horses, gambling. I want to live a different kind of life, be with my family more because I didn’t give them enough time.’

Sharif became friends with Peter O’Toole during the making of Lawrence of Arabia. They appeared in several other films together and remained close friends. He was also good friends with Egyptologist Zahi Hawass. Actor and friend Tom Courtenay revealed in an interview for the July 19, 2008, edition of BBC Radio’s Test Match Special that Sharif supported Hull City Association Football Club and in the 1970s would telephone their automated scoreline from his home in Paris for score updates. Sharif was given an honorary degree by the University of Hull in 2010 and used the occasion to meet up with Hull City football player Ken Wagstaff.