Elections to the WBF Committee of Honour 2014 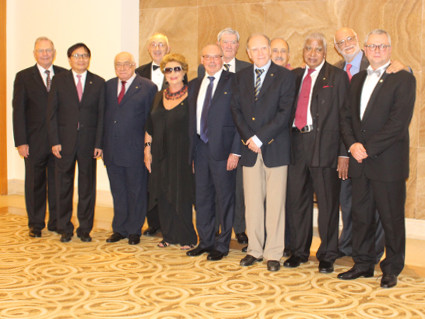 Elections to the WBF Committee of Honour 2014

At the first meeting of the WBF Executive Council held in Sanya, China on Sunday, 12th October 2014, and in accordance with the WBF Bylaws, in recognition of their unselfish efforts in making a significant contribution to the enhancement and growth of bridge throughout the world :

Patrick Choy, Marc De Pauw, Al Levy and Anna-Maria Torlontano were elected as new members of the WBF Committee of Honour and were awarded the WBF Gold Pin, joining the existing members

Also, by acclamation, the Executive Council awarded the WBF Gold Pin posthumously to :

eminent and unforgettable personalities in their social life and not only in the bridge world, extraordinary persons who worked with enthusiasm, dedication and passion for the development and affirmation of our discipline and whose memory will accompany us, and all their bridge friends everywhere in the world, for the rest of our lives.
More information about the WBF Committee of Honour