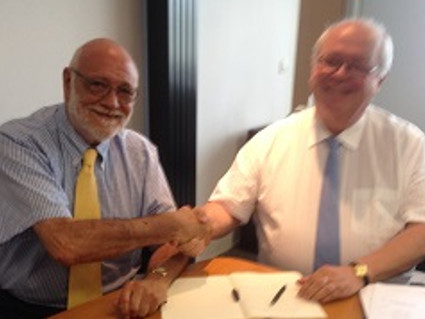 Contract between WBF and FFB for Lyon 2017 signed 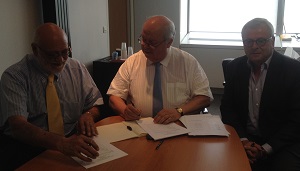 At a meeting held on 16th June at the Headquarters of the French Bridge Federation the contract between WBF and FFB for the organisation of both the World Teams Championships (BB, VC, d’OST and WTOC) and the World Open Youth Championships was signed.

The Championships are to be held in Lyon with the World Teams running from 12th to 26th August and the Youth Championships from 15th to 24th August.

Lyon is France’s third-largest city, and is well-known as the gastronomical centre of the country.

The announcement followed a presentation by two representatives from Lyon, and two from the French Bridge Federation. Putting together a video and slide presentation were Eric Remy, general manager of the French Bridge Federation; Sebastien Bret, development manager of the city’s Convention Bureau, and Jean-Philippe Daublain, president of the District of Lyon.

They were introduced by Jean-Claude Beneix, part of the WBF’s Championship Committee.

The video showed Lyon at its best, with lots of activities, plentiful hotel rooms and restaurants, plus easy access from a variety of locations around the world. Sebastien said there may be direct flights to Lyon from more locations by 2017. A connection from Dubai has recently been introduced which makes access from Asia easier, and visitors from North and South America can arrive by plane via Paris-Roissy or Geneva for the relatively short train trip.

Visitors who fly into Paris will have an excellent train service available, with 86 departures a day. The train trip from Paris to Lyon is less than two hours.

The tournament will include the usual championships – Bermuda Bowl, Venice Cup, d’Orsi Seniors Trophy and World Transnational Open Teams – and the Lyon organizing team proposes that the schedule should include side games for club players, Junior/Girls/Youngsters competitions and schools players (9 to 16 years old).

Lyon is well known for its famous restaurants, from “bouchons” to world-renowned Paul Bocuse’s establishment.

The city also offers cinemas showing the latest films, two casinos, museums featuring contemporary art, the Institute des frères Lumière and many others. There is also the remarkable Quartier Renaissance.

Lyon is not far from vineyards such as Beaujolais , Cotes du Rhone, Bourgogne and the historical city of Avignon is just an hour away by train.

For more information, visit the Tourism Office or the Convention Center